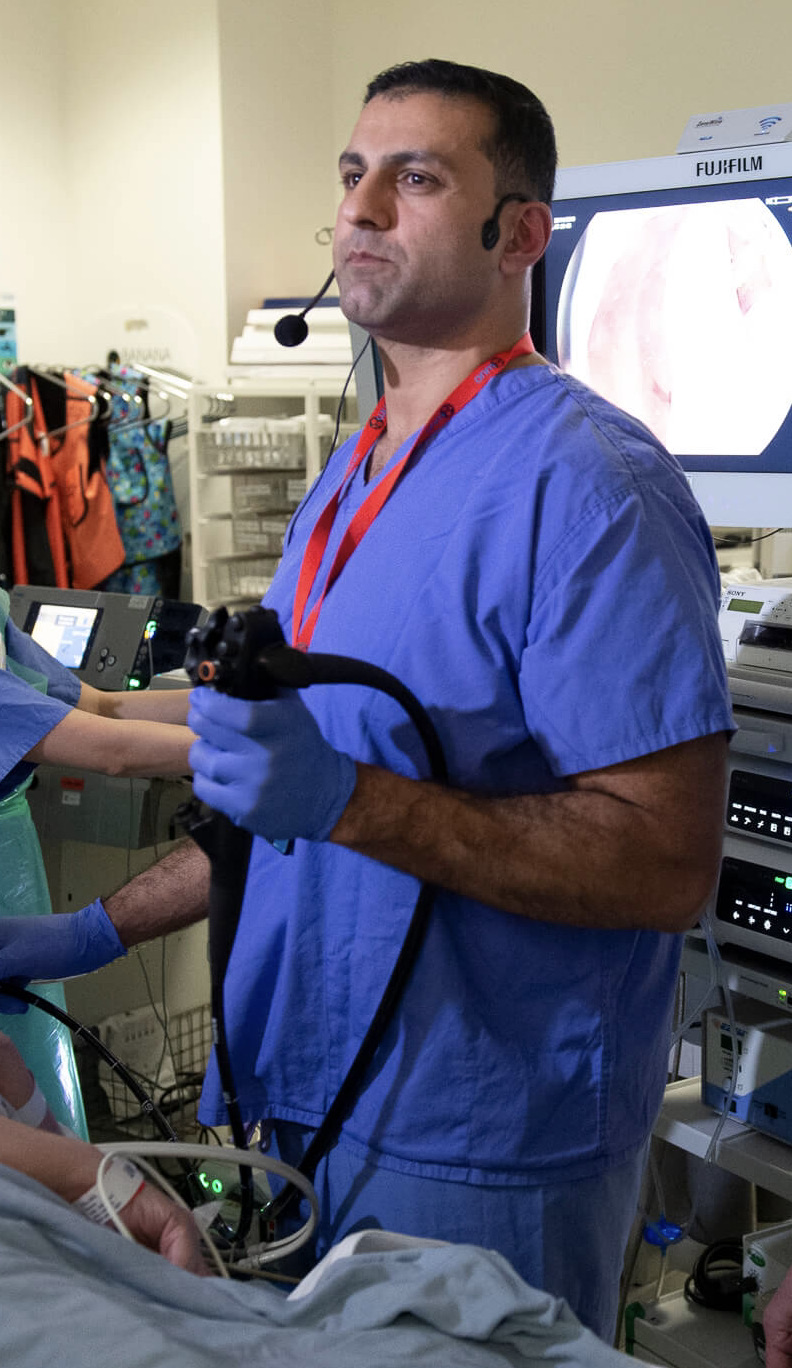 He trained at St Mary’s Hospital in London and completed his Specialist Gastroenterology training in North East London. He was then appointed to a two-year academic fellowship at UCL where he examined state of the art and innovative diagnostic and therapeutic endoscopic techniques for the diagnosis and treatment of early cancers arising in the gastrointestinal tract.

He was appointed as a consultant in 2011. He was until recently the director of endoscopy for the division of gastroenterology at University College Hospital and The London clinic. In 2021 he joined the world acclaimed Cleveland Clinic London and became the Clinical lead for Endoscopy for this prestigious and reputable global institution.

His main interests are therapeutic and innovative endoscopic procedures. In particular he has focused his interest in pre-malignant and malignant disorders of the upper gastrointestinal tract, with a particular interest in Barrett’s neoplasia, Squamous neoplasia, oesophageal cancer and advanced interventional endoscopy.

He carries out minimally invasive treatments for acid reflux such as Transoral incisionless Fundoplication (TIF) and Stretta and was among the first UK endoscopists to carry out metabolic and bariatric endoscopi,: procedures such as Duodenal mucosal resurfacing (DMR) and Endoscopic Sleeve Gastroplasty (ESG).

Dr. Haidry specializes in seeing patients with the following conditions:

Dr. Haidry has an individualized and tailored approach for each patient he manages. He states, “No two patients are the same. It is possible to narrow down the cause of a very vague symptom such as abdominal pain, bloating or unexplained reflux by taking a precise medical history, performing a thorough clinical examination and then carefully choosing the appropriate tests to make an accurate diagnosis”

Dr. Haidry goes on to state, “Armed with the correct diagnosis, I then engage all my patients to explain the options available. I like to work with each patient to set up an individual treatment plan with realistic time lines and achievable outcomes”.

Dr. Haidry also appreciates that the signs and symptoms for the various problems that patients present to him can be long standing and affect people’s quality of life on a daily basis. He explains, “several of the symptoms and conditions that patients come to see me with are often embarrassing to talk about and patients feel they are unique. By reassuring them that actually there are many other patients with similar problems, and that help is available, one can start to improve their outlook on their symptoms”

Dr. Haidry aspires to clinical excellence. “I feel it is very important to deliver the highest quality of care to all my patients. This is the case whether they come to see me in my busy NHS practice at University College London Hospital or for a private consultation at the London clinic”.

Dr. Haidry has a very balanced approach to his work and personal life. He says “I am dedicated to my patients and passionate about the work I do in my NHS practice, all my research projects and private practice. However, I ensure that I have a very balanced approach to life and my time with my family and children is very precious and special to me”. 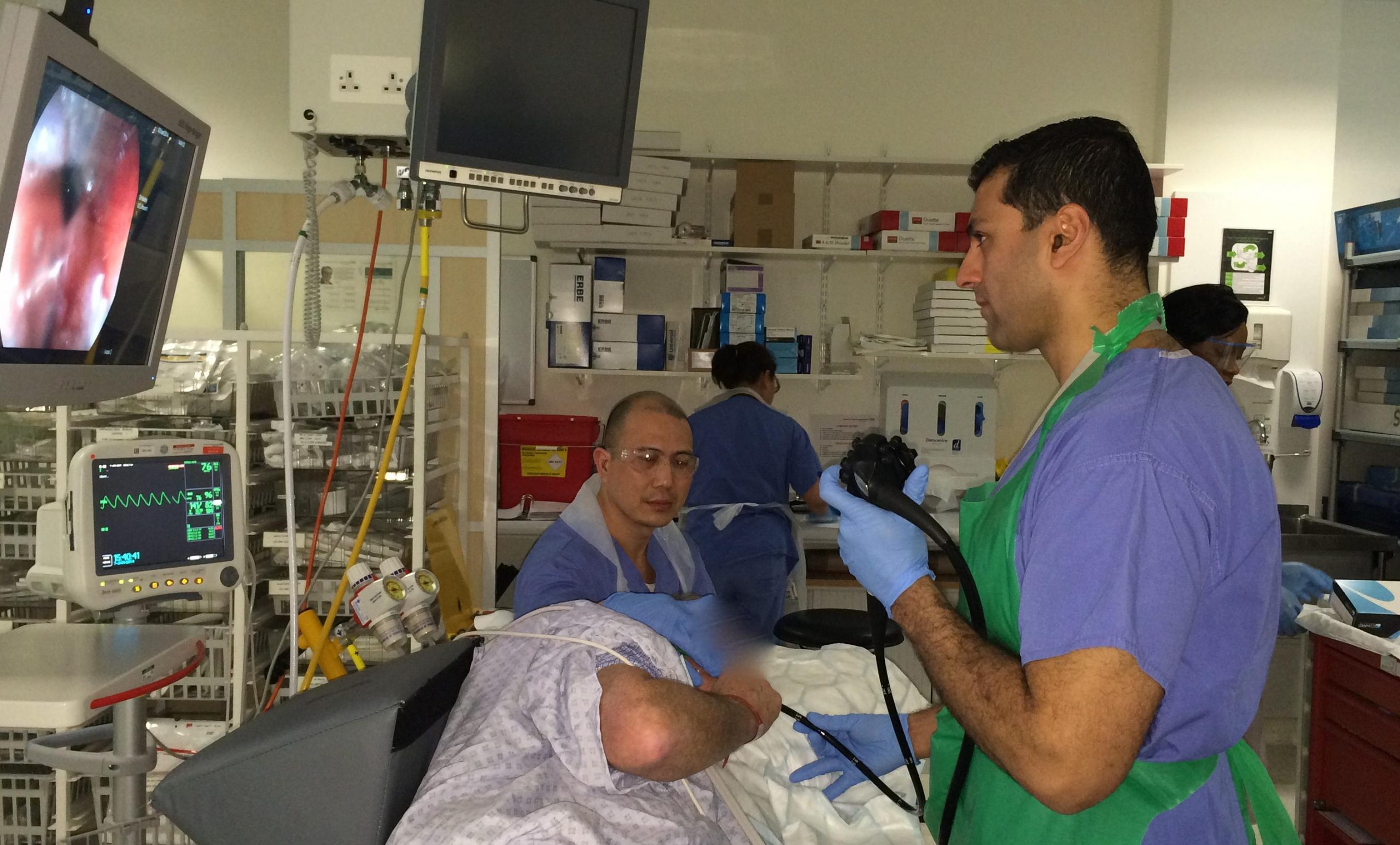 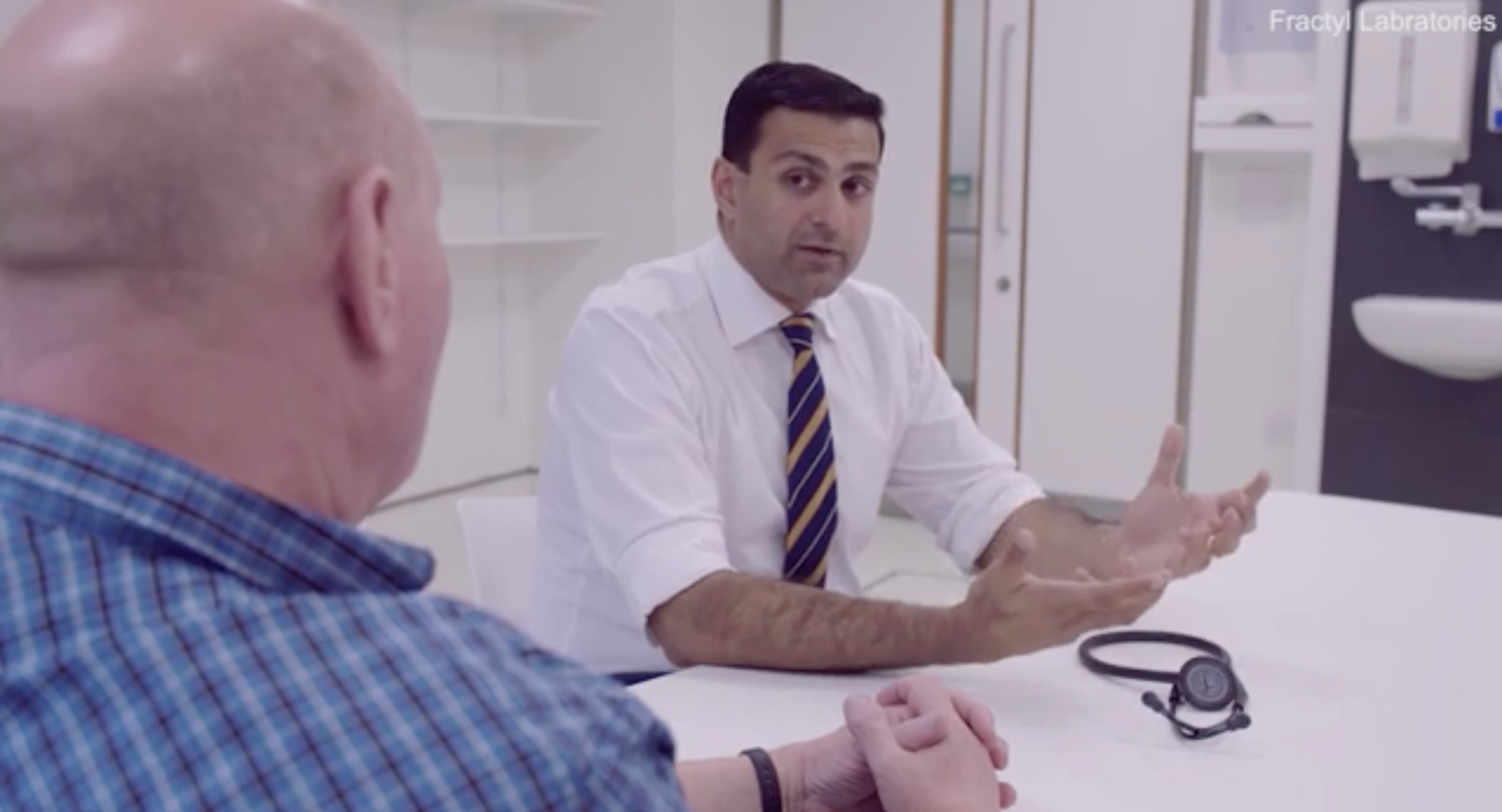 Dr. Haidry has is actively involved in several research projects at world leading University College London and continues to be published in several leading journals in his field.

He says, “I am fully committed to high quality clinical research to provide innovative and state of the art care to our patients. This is why I am involved in several important clinical trials and why I continue to push the boundaries of research excellence through my role as Honorary Associate Professor at University College London”.

His research interests are focused on developing new methods for detecting and treating dysplasia (early cancer) in Barrett’s Oesophagus and other pathologies of the gastrointestinal tract. He coordinates and runs one of Europe’s largest endoscopy registries, the UK Radiofrequency ablation registry, which collects nationwide outcomes of this exciting new intervention in patients with early cancer of the oesophagus. He explains “The outlook for patients with oesophageal cancer is poor in our country due to the fact that we often diagnose them late. By diagnosing patients with reflux and Barrett’s Oesophagus early we are now successfully treating many patients with early oesophageal cancer and really making a difference.”

He is currently looking at new procedures such as cryoablation for freezing away early cancers of the oeosphagus – this appears to be an exciting technology for the future. He was the first to perform cryo-ablation for patients with Barrett’s oeosphagus and early squamous cancer in the UK and is currently leading on a large European study examining this technique in patients.

He is also exploring endoscopic approaches to treat patients with Type 2 Diabetes Mellitus which affect over 3 million people in the United Kingdom. Duodenal mucosal resurfacing (DMR) is an innovative and novel endoscopic intervention for the treatment of patients with poorly controlled Type 2 DM. The first ever cases in the UK have been carried out by Dr. Rehan Haidry at UCLH in the 2015. Carefully selected patients with Type 2 DM have undergone successful treatment as part of a multi-center study (Amsterdam, Brussels, Rome) with 12 month follow up showing improvements in glycemic control in all patients treated to date. He has recently published these findings in Gastro Intestinal Endoscopy in 2019 and will be offering this to patients at the London Clinic in the coming months. 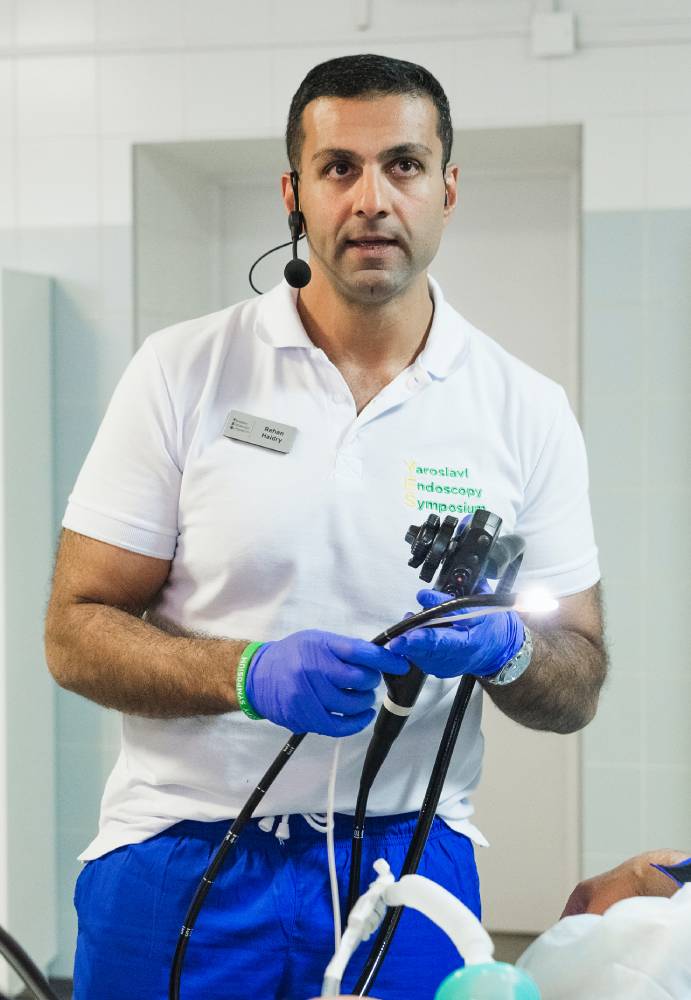 Acid reflux is a fairly common problem, and is often manageable by watching what you eat and medications for a short period of time. However, in some people, it can become a recurring problem that has a big impact on their day-to-day lives. Stretta is one procedure that aims to solve the problem in a unique way. Dr Rehan Haidry has been carrying this procedure out at the London Clinic for select patients. Here is some feedback from some of the numerous patients he has treated with this exciting procedure:

It’s been six months since my Stretta treatment and I feel wonderful! Hardly any heartburn, no nausea or stomach upset, the best thing I’ve ever done.

I take Gaviscon sometimes and very infrequently Ranitidine 150mg, only if I go to wine tastings or know I might eat too much. Otherwise no problems at all. I am so happy, it has improved my quality of life no end! I couldn’t recommend it highly enough!

Before Stretta I’ve been nauseous and ill nearly every three months. I’ve had gallstones, and they’ve been removed last year, that might have helped too, but I am feeling great since Stretta.

Glad I saw Dr. Haidry, he is a pro and knows what he is doing.

Before I had stretta I had the following symptoms :

– waking up each morning with my nose congested, a sore throat and a bad taste in my mouth

– I felt lethargic most of the time. When wanting to do exercise, running out of energy quickly and getting out of breath easily and always with a runny nose

– immediately after the procedure I was in a bit of pain but once the paracetamol had kicked in this was managed.

– I was back eating medium to solid foods with a week

– after a couple of weeks, day to day routine was back to normal. I had held off training but soon for up and running with that again

– chest was a bit sore initially internally upon long distance running but this was within a month of the procedure so probably to be expected.

– occasionally wake up with sore throat. Usually if I have eaten something I shouldn’t have but in the round 70% improvement on prior to the procedure.

– still get a bit congested which is why I am keen on a stretta 2 but it’s nothing like what it used to be.

On the whole I would say a 70% improvement overall. Some days, it doesn’t even cross my mind whereas prior to the procedure I knew about it each day and looking back, it was quite depressing.

I am so pleased I did it and I wouldn’t think twice about a second one if the benefits built on where I currently am. “

Mr F.
“I had no problems post procedure and managed discomfort with just Paracetamol for the first couple of weeks. I am currently taking Esomeprazole 20mgs bd and Ranitidine 300mgs at night. It is 12 weeks since the Stretta and I have noticed some improvement over the last 3 or 4 weeks. I was very troubled by mucus production throughout the day and that has drastically reduced. I get some discomfort at the base of the oesophagus but less intense and less often than before. Bitterness in the mouth symptoms were happening after nearly everything I ate but it mostly occurs now on waking in the morning and if I overeat or make an unwise food choice. Of course because I feel a bit better I am tempted to do both these things! I can now drink an occasional cup of tea or coffee with no reflux. Overall I would say my symptoms are 10 to 15% improved. I still have the occasional “bad day” for no obvious reason.”
Mrs R.

If you would like to find out more or to book an appointment with a Consultant Gastroenterologist in London – please get in touch with Dr Rehan Haidry today to see how he can help.